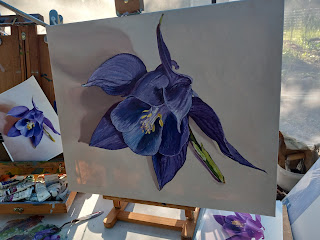 Holly Tourdot is a full-time artist living on Madeline Island since 2003.

She came to Red Cliff in 1999 as a legal intern and left a law school dropout who was no longer ashamed to be an artist. Seeing Lake Superior for the first time changed her life. It corrected her assessment of her abilities and her role in this life. She accidently moved to Madeline Island and juggled her creativity with jobs until 2009 when she quit the jobby-job-type-jobs and began to rely solely on her art to pay the bills.

Holly's love for Water, Trees, Rock, and Sky compelled her landscape painting. She then developed two signature series: The Sleeping Dogs of Madeline Island and Precipice. Later, with a busy Grandmother schedule, Holly moved from detailed studio pieces to the open air. This allowed her to create fast, loose, painterly landscapes.  Holly has been commissioned for portraits, line drawings, signs, and murals.  She has created over 700 pieces in the years she has lived on Madeline Island. Less than two dozen of her original works remain available.

Holly creates the inconsistently published Madeline Island Calendar from scratch. The latest featured local food producers for 2021. Her greeting cards and prints are available through galleries and online.

Currently, Holly is finishing the mural, Riemans Then and Now, at the Madeline Island Public Library.

Columbine 102 is the second of her new series inspired by Beethoven String Quartet No. 7 in F, Op. 59, No. 1. and begun as a collaboration between Woods Hall and Music Camp. With headphones playing the piece repeatedly, Holly first painted a few somewhat abstract woodland scenes but they did not capture the feel of the music. At a loss, but with the music echoing in her head the next day, Holly stumbled upon a common Columbine volunteering at the edge of the ditch next to her home. That Columbine, with each delicate multi-chambered flower hanging like a note from its linear stem with leaves rounding out the background, was the troupe making Beethoven ocular. Thus "Columbine 101" oil on canvas 14" x 11" was painted and sold immediately, still wet. Here you see "Columbine 1021" oil on canvas 24" x 20" as it was reserved for the performance. 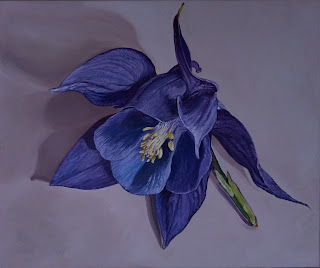 Her available original work is also presented at:

Commission or purchase art through email